We are all looking for some sense of security. Even the simplest appliance comes with some form of guarantee; so we enter this world with only the guarantee that our inevitable birth and death will be celebrated without our awareness.

To enjoy the challenge of what-lies-in-between, why not add MONDAYS to your personal list of necessary celebrations?

The day has had some very bad press, ranging from Garfield’s amusing endeavours to evade the day to Wikipedia’s dry
„A number of popular songs in Western culture feature Monday, often as a day of depression, anxiety, hysteria, or melancholy“ and „More people in England and Wales commit suicide on Mondays than other days of the week.“

I accept the challenge of making the 52 Mondays we are guaranteed nearly every year celebrations of the promise of new beginnings, never forgetting the mirth and misery of the past that colours every sunrise.

Bigger parties than mine were probably celebrated on this day in
-1814 in Milan by Rossini, when his opera „Il Turco in Italia“  was first performed, or in
-1952 in Salzburg by Richard Strauss when his „Die Liebe der Danae“  saw the light of day.

To add beauty to today’s celebration of Monday, here the musings of Helen Bickers, a southern belle, on simpler times and serious jewelry from the Arts and Crafts Movement.

After the myriad of styles that marched through the 19th century, some people, bored with the stale pomp of Belle Epoque garland style and tired of what they saw as the over-refined decadence of Art Nouveau, yearned for the simpler times, i.e. the middle ages. OK. So we get the Arts & Crafts Movement. Hey they wanted simple, what could be a bigger simplification than what I just wrote? 🙂

Tired of the table-cut diamond/sapphire/ruby/emeralds of haute joaillerie (the very idea!), artists sought to expand the palette with (for the time) odd, less expensive materials (basically anything not clear, shiny, sapphire/diamond/emerald/ruby) and antique techniques. They wanted to put beauty in the everyday reach of the middle class. The hand of the maker should show, the opposite of mass production. Tumbled stones, odd cuts, rough cabochon, bent wire and canatille work all were grist for the mill.

I think this may be one reason L C Tiffany had Mr Kunz out looking for new gems in new areas of the world. He too ascribed to the A&C ideal of “art in everyday things” but with his big firm and sophisticated clientele behind his genius he was able to simplify things on a grand scale.

A sale catalogue describes Ms. Nossiter’s output: “Dorrie Nossiter’s work is characterised by harmonious clusters of claw-set precious and semi-precious gemstones.”
Clusters for sure, but a lot of her stuff looks like “throw stuff & see what sticks”. Here some of the less egregious:
Jade Chrysoberyl & Zircon 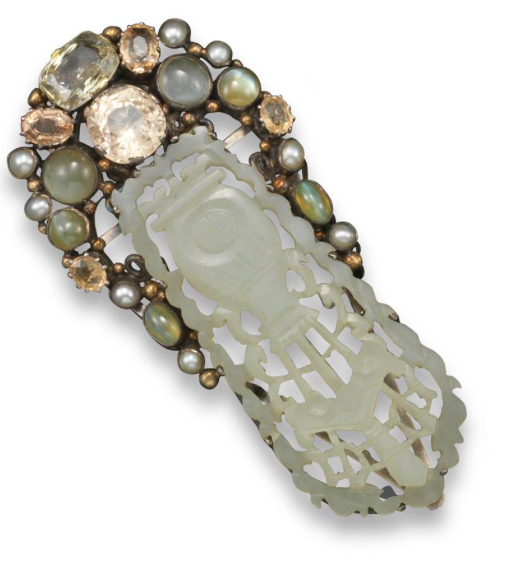 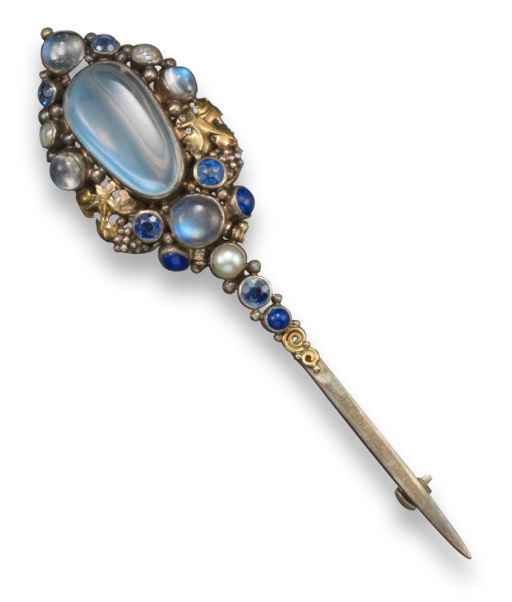 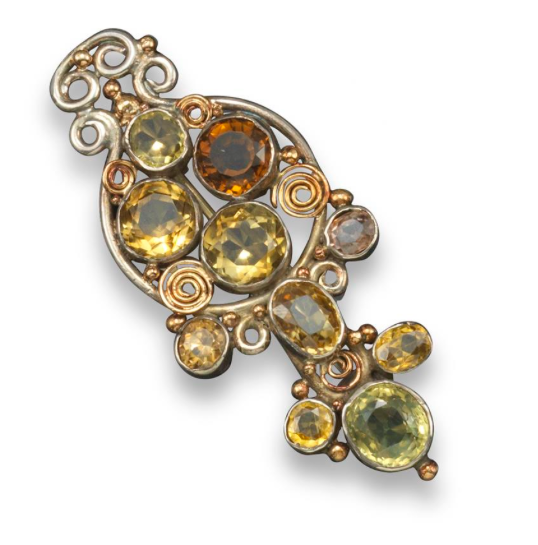 The most classic bombast of hers I’ve seen, but in the half tone green-ey yellow-ey shades of prevailing fashion and chandelier drop-sized briolettes:
Pretty out there for the time.
Citrine and Peridot 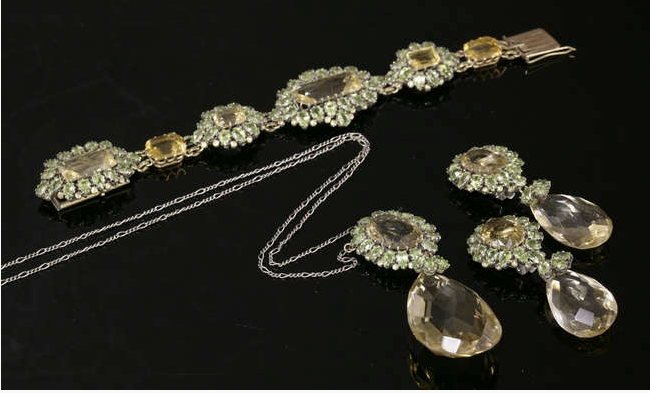 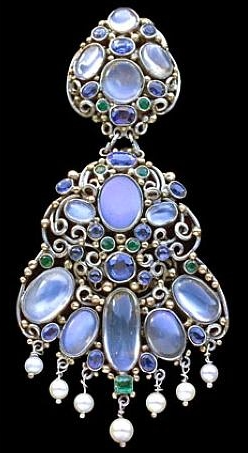 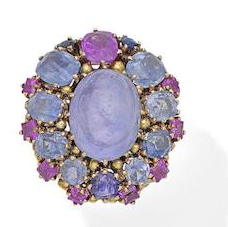 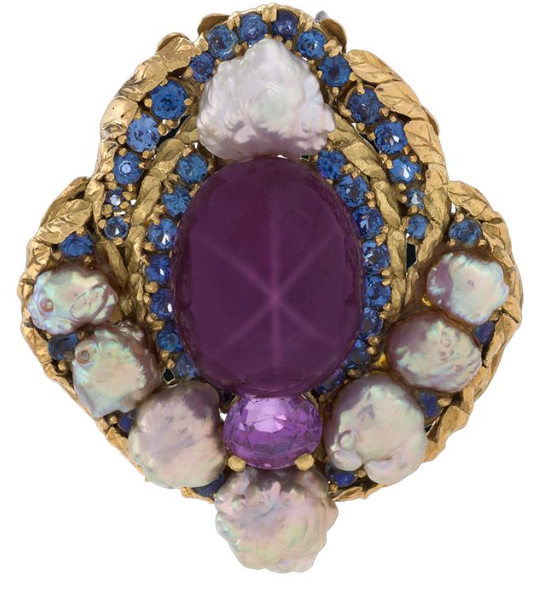 John Paul Cooper 1910 left
Gee it’s like a movement or something! 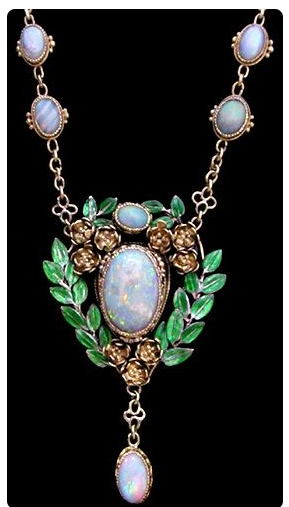 Henry Wilson was an absolute master of enamel. His works include the holbeinesque – pared down, simplified pre- renaissance 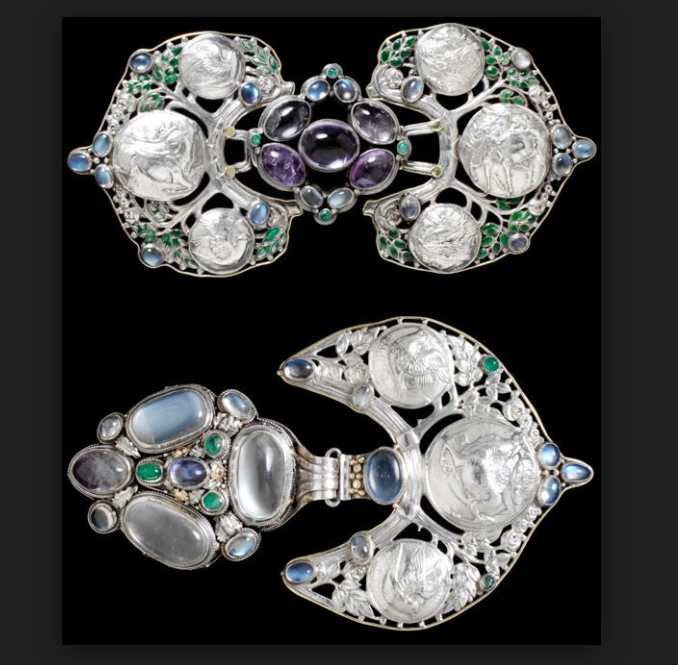 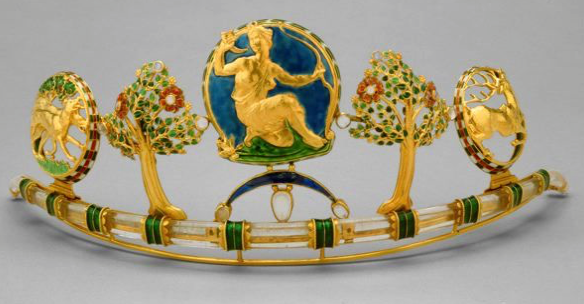